Homeowners Duke it Out with Their Homeowners' Association: How Best to Solve the Problem (Part 2)

In our last learning article on homeowners' associations (HOAs) and home solar panels, we reviewed the restrictions that HOAs may place on their residents to install solar panels. In this article, we assume that you have a problem with your HOA and you are looking for a solution to resolve the problem. We explore some approaches that you may want to consider to solve problems with your HOA. 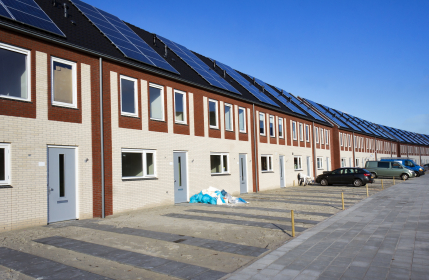 In general, a HOA will respond positively to homeowners who are willing to negotiate, because the HOA, like a homeowner, would prefer not to waste money on expensive litigation. It is also important to keep in mind that a HOA is made up of homeowners of the community: the homeowner installing the solar panels will be dealing with a neighbor who belongs to the HOA. Just like it is nasty and problematic to fight one's neighbor, a homeowner should try to avoid problems by negotiating with the HOA first. Three questions must be asked in the face of an unreasonable restrictive covenant:

2. Is Architectural Review Committee permission necessary and was ARC review conducted fairly?
Reviews from Architectural Review Committees (ARCs) of HOAs reviews are general, broad and subjective, and any new installations have to show a "harmony of external design and location in relation to the surrounding structures and topography." However, the law requires reviews to be conducted fairly, consistently and in good faith. Failure to do so can be challenged in court. If an ARC has a certain set of criteria for evaluating solar power systems, a homeowner should make sure these are followed. If not, a homeowner can propose criteria before, or at the same time as the installation.

3. Is it clear that the restrictive covenant applies to this system?
When the covenant bans solar energy system installations, a homeowner still has some options:

There are examples of successful negotiations with a HOA. In Fresno, California, three residents of the Park Fort Washington Association sought to install solar swimming pool heating systems. These were originally denied on the basis that no "heating, ventilation, or air conditioning" units may be installed on rooftops. The contractor stepped up and asked the HOA to reconsider, citing the Solar Rights Act; when the HOA refused to change its decision, the contractor suggested it would avoid installing the system on the front of the homes, which ultimately led to an agreement in which the solar installations were allowed.

If the ARC restricts or prohibits a solar energy installation, it may be acting against state law. Some states or cities have preemptive laws concerning solar rights. These laws override any private conditions, conventions and restrictions that limit a property owner's ability to install a solar energy system. 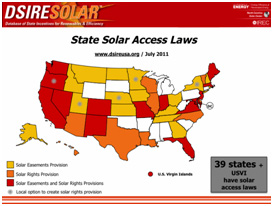 One example of a case in which state laws were used in favor of homeowners is Garden Lakes Community Association v William Madigan, et al, 204 Ariz. 238 (2003), in which two homeowners installed solar heating systems for their pools without the approval of their HOA. The applications for approval were not granted based on the association's CC&Rs, which placed costly restrictions on the installation of the system. The court ruled that the HOA was effectively prohibiting the installation of the solar system, which is contrary to Arizona state law on solar rights.

The problem with relying on state laws to protect a solar installation is that there is no enforcement mechanism besides litigation, and that courts generally determine whether a covenant prohibits a solar installation on a case-by-case basis. This is to say that if a HOA does not cooperate, the homeowner must resort to legal action in order to enforce these laws.

Legal action as the last resort

If, after negotiating and pleading with a HOA, a solar energy system is still not approved, the homeowner may choose to take the case to court. The homeowner's strategy is different when he sues his association and when the association sues him.

In the former case, a homeowner may use the law as a sword against the HOA. He may ask a judge for a declaratory judgment, in which the judge clarifies the homeowner's rights and duties under the law. This judgment is binding, and can only be done before the installation and only if there is an actual and genuine dispute-in this case, after the ARC has denied approval for the system. The homeowner may also seek to prevent enforcement of the covenant. In a state with solar statutes, the covenant must be shown to prohibit use or installation of the device through "unreasonable" restrictions, which include a significant increase in the price of installation or a decrease in efficiency of the system.

If, on the other hand, a state does not have solar statutes, a homeowner may prove, according to the guidelines above, that the covenant does not apply to his system, that ARC approval for the system was unreasonably or arbitrarily withheld-which can be done by showing that the process of review was not fair or consistent-, or that the restriction violates public policy favoring solar energy: public policy favoring solar energy seeks pollution reduction, energy security or independence from imported fossil fuels.

If the HOA sues the homeowner, the homeowner's legal strategy may change. If the HOA has, in the past, allowed other homeowners to install solar energy systems without interfering, it might have waived its right to enforce a restrictive covenant prohibiting solar installations because the court will see this as proof that the HOA has agreed to allow solar installations. In addition, if the association has permitted many wide-ranging violations of a certain restrictive covenant, a court may decline to enforce it. For instance, if there have been many violations of a covenant regulating external alterations of homes, then the homeowner may be able to prove abandonment of the restriction.

Next, if an association's objections only surfaced after the installation of a system, a homeowner may be protected by the equitable doctrine of laches. This means that a HOA sat on its rights for too long, and can no longer validate its claims against the installation. Consider, for illustrative purposes, the instance of a neighbor who builds a fence on Kate's property; if Kate lets the matter rest for whatever reason, and finds out twenty years later that the fence is on her property, she can only force her neighbor to move his fence if she can prove that it causes her more damage to keep the fence where it is than it costs him to move the fence; otherwise, she can do nothing about it. Finally, preemptive state solar laws can also prevent a homeowner association from forcing the removal of a solar energy system.