The Good, Bad and Ugly in Inverters: All the Questions You Need to Ask

Chances are you never heard of a solar inverter until you decided to place a solar energy system right above your bedroom. And now the installer is telling you about these inverters as your eyes start to roll back into your head. But before you completely fade away, you probably need to know a few things before you can make an intelligent decision. Probably the most important decision today is not what manufacturer, but what kind of solar inverter: a regular inverter or a micro-inverter. We will demystify the subject of solar inverters in this learning article.

Inverters are at the Heart of Your PV System

Inverters don't have the sex appeal of solar modules, but they are the heart of the system. Residential solar PV installations are setup with a central inverter connected to the entire array, with 2 inverters common in arrays over 7 kW. Whatever the size, each array is different and every solar site has unique attributes. Managing these attributes has given rise to a new competitor in the inverter market: the micro inverter, the most popular of which is the Enphase Micro Inverter.

So what is a micro inverter, and why choose one? Micro inverters convert DC current to AC right out of each panel, instead of at the end of a string of panels. The most common reason for choosing them is if you have any shading issues to contend with - micro inverters can better manage your solar window.

With a central inverter, the entire array is dragged down to the performance of the shaded area of the array. The shade may come from a building, a tree or even a passing cloud.  If one panel out of twenty is shaded, the array will perform at the shaded panels' level. You'd be better off if that solar panel used on your home was out of the picture!

A viable solution for this issue is the micro-inverter. These inverters connect one at a time to each solar panel, outputting AC electricity before connecting to the next panel. If you're hiring your local electrician to wire up your array and they haven't done solar before, micro inverters can put the install in an output they can relate to.

Micro inverters plug into one another in serial fashion and reduce the wiring challenges of DC electricity. Some panel manufacturers are incorporating them into the solar module design, and selling modules with inverters as a package. But the bottom line is reductions in output from one shaded panel will not reduce the output of the other panels. The shaded panel will simply contribute less electricity until the shade is gone - or moved over to the next panel. 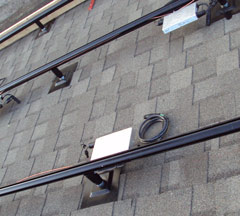 What happens if an inverter fails? As the heart of an array, if your inverter fails your array is down. If you have a centralized inverter, the entire array is off line until the inverter can be replaced. If you have a micro inverter, only one panel is down so electricity is still being produced, just not at the same level. Inverters have to work harder than panels and most inverter warranties are only 10 years. Micro inverters are competitive and the Enphase Micro Inverter that SolarTown sells will ship with a 15-year warranty. If one fails in the middle of winter, you can afford to wait for better weather before swapping it out.

Conversely, if you have micro inverters integrated into your solar energy system, you have a lot more moving parts. It is like having one big light bulb in your living room, or 12 small light bulbs. When the time comes to replace a light bulb, you end up replacing 12 bulbs or just one.

After installing both central inverters and micro inverters, SolarTown's solar engineer likes the idea of reduced voltages. If you have a 4 kW array, operating voltages are commonly 150 - 450 volts! With a micro inverter, the installer is just dealing with voltage at the panel level, so there is reduced risk of electrocution. Additionally, SolarTown's solar engineer recently installed his own array, which neatly fits into one small junction box before running to the AC disconnect box. Since micro inverters are small (about 8"x10"x1"), they tuck in tightly below each panel, so you won't have to contend with the space requirements of a central inverter. And if you are the one actually installing your array, you will be happy to know that there's one fewer disconnect required.

Everyone always wants to know about cost. So let's keep it simple - micro inverters do cost more, but not significantly. For example, let's say you are wiring a 4 kW array: You  can choose a central solar inverter costing $2300 - $3000. If the solar array is made up of 18 230-watt panels, you would purchase 18 micro inverters for $3600. But as your goal is to get the most out of my solar panels (the most expensive part) and you have a bit of shading from November - February, the micro inverter pays for the additional investment over time.

If you had a central solar inverter, your small solar array might be working at 50% of its optimal output during the winter months. With micro inverters, the seasonal shading impact is minimized.

Why else would I want to buy a micro inverter? After all this, the biggest selling point may be the monitoring capabilities offered. With an Enphase Micro Inverter system, owners can view their production on a per-module basis from any internet connected PC. If you haven't seen this it is well worth a look: https://enphase.com/ Link on the products page and check it out. Once your array is wired and turned on, system owners connect the Envoy Energy Management Unit to any AC outlet in the house, and an Ethernet (cat5) cable from the EMU into a standard wireless router.

With this setup, the EMU broadcasts module production data to the Enphase website and displays the daily output, monthly output, and lifetime output of your array. Production monitoring is still in its infancy, but the sophistication of this display is really satisfying. And if a solar module is down, e-mail alerts are available as well as the display to show you which module is performing below expected levels. If someone else installed your solar energy system, they can be notified as readily as you are.

If you're installing a small solar energy system (under 10 kW), are space constrained, have shading issues, or just want to simplify your installation, micro inverters are worth consideration.