If you live in the city and are connected to the grid, you probably do not think very much about how electricity is delivered to your home. But if you live off the grid or are planning to deliver electricity to a remote region, then you need to think of the various alternatives. Since you do not have the luxury of the entire infrastructure for carrying electricity from the source to the point at which it will be used, there will be costs involved. 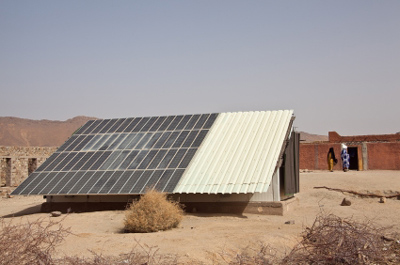 Solar energy is a viable option for rural electrification

For a standalone home system, solar photovoltaic (PV) systems provide the most viable source of electricity. In contrast to solar energy, wind and hydropower are site-specific and are strongly affected by the seasons. For instance, a small wind turbine requires wind speeds of at least four meters per second to generate electricity, and there are seasons during which there is very little wind. Water supply is also very seasonal, as there are many places that have dry and wet seasons.

Solar energy, however, is generated even on cloudy days, and a solar battery system ensures energy access even at night. It is, according to the World Bank, the only technology that can function anywhere despite geographic variations in the resource (in this case, the sun). There is no need to regulate the site beforehand and there is little maintenance required once the installation is complete.

The two major approaches to delivering electricity to remote areas such as a village are isolated solar home systems (SHS) and village microgrids (also known as minigrids). In deciding what energy system is optimal to power a rural village, the number of homes on the system will dictate which system is better. You may have to dust off your old Economics 101 text book on marginal cost, because the main tradeoff is between the marginal cost of distribution and the cost of installing a solar system in a house.

Let us take an example to demonstrate what we are talking about. In a small village, a  SHS will likely use one solar panel. This gives it a capacity of between 80 and 300 watts of peak power (Wp). Peak power is the measured output from the solar panelsunder certain test conditions.  This output is basically only achieved when the panels are in full sunlight. Most SHS will use smaller wattage panels from 80 to 150 Wp. A 100Wp SHS produces a bit more than half a kilowatt hour per day, enough to provide 10 hours of lighting from four seven-Watt lamps and several hours of television viewing.

While our 100 Wp example may not satisfy the energy requirements of a modern American household, it represents a huge improvement in the quality of life in many less developed areas. The World Bank notes that electric lighting can lead to significant social development saying : "[it] allows children to study in the evening and women to gain some precious time for themselves or to extend income generating work into the evening hours".

In the graph below, we assume a village with one hundred households (HH) and an SHS of 50Wp. It is clear that as the number of households increases, the price of installing yet another SHS increases while the price of adding another house to the grid decreases the cost of the whole grid. Thus, in the case of a small village, it makes more sense to install a minigrid than to install a SHS on each home separately. While the cost of a 50Wp SHS has decreased dramatically since this data was first presented, the trend is still the same. The greater the number of households in a village, the greater the benefit from a centralized electricity production system. 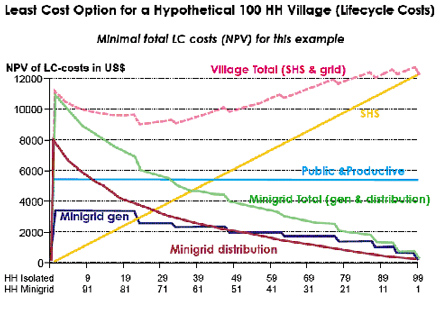 For a small village, the World Bank proposes using a hybrid renewable-diesel system. This is because pure solar electricity systems can take more than twenty years, depending on technology and location, to become more economical than a diesel generator. Furthermore, it was proven in a separate research study that in countries where solar irradiance is 3-6kWh/sq. meter, a hybrid solar photovoltaic-diesel-battery system makes the most sense. This is because solar photovoltaics and diesel have complementary characteristics, and adding PV production to a diesel generator will lessen the load of the generator: 27% less fuel is used and 24% less carbon dioxide is emitted.

The figure below shows that as more PV is generated, the operation time of the diesel engine and any additional diesel engines is reduced. In addition, since the amount of electricity installed in the minigrid depends on consumption rates, and the rates of consumption will probably go up with electricity availability, it is easy and inexpensive to increase capacity with a renewable-diesel hybrid system.

By providing electricity to rural areas we can improve the quality of life and produce profound developmental effects. In 2012, 1.6 billion people live without any access to electricity. By combining technologies, such as photovoltaic panels and diesel engines, in microgrids we can start to decrease that number. 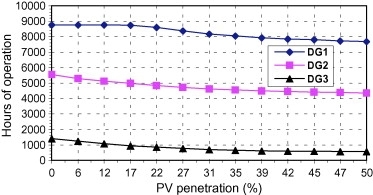