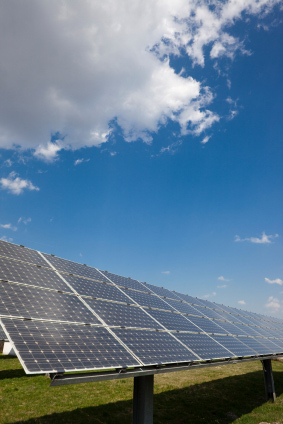 Related Article: Going Solar: What are the Economic Incentives?

Tax incentives are the simplest method of promoting solar energy, because they are not controversial (everybody enjoys receiving tax credits), and are long-term, meaning that consumers can plan for the future. This is the only federal incentive in the US.

The Energy Policy Act of 2005 introduced the federal tax credit for residential and commercial energy property; it was revised with the American Reinvestment and Recovery Act of 2009. The tax credit provides a 30% credit based on the installation cost. Say an installation costs $30,000; with the federal tax incentive, the customer saves 30% of that cost, or $9,000. The ITC is set to expire in 2016, but it is a long-term and stable policy that promotes solar energy installations. The 1603 Grant allows commercial buildings to choose a 30% grant instead of a tax credit; it is set to expire at the end of 2011, but there is a proposal to extend it one more year. The Grant has proven to be a great driver for commercial installations of solar energy.

Related article: Why We Need a Federal Solar Policy

Property Assessed Clean Energy, or PACE, allows property owners to borrow money from a local government to pay for renewable energy and energy efficiency improvements. The solar installation is attached to the property, not the individual, and the amount borrowed is repaid with the mortgage, via property tax assessments or other locally-collected taxes or bills such as utility, water or sewer bills. There is no upfront cost to the homeowner and the price of the installation will transfer to the next homeowner if the first were to sell the house. PACE offers long-term, stable financing, which we have already established as crucial, and must be authorized by state legislature before it can be authorized by city legislature.

Thus, PACE has incredible potential as a solar energy incentive tool. PACE is implemented on a city or county basis. Funding for PACE projects comes from several sources, one of which is ARRA. In this sense, the federal government is involved in PACE financing, but its role is diminishing because of an announcement in May 2010 by the Federal Housing Finance Agency, in association with Fannie Mae and Freddie Mac, that effectively froze most PACE programs by disqualifying most homes with a PACE assessment from receiving a mortgage from Fannie Mae or Freddie Mac.

In 2009, the government released a Policy Framework for PACE and Guidelines for pilot PACE programs to make the program more stringent, but today, the future for PACE is likely in commercial buildings. Twenty-seven states and District of Columbia have passed PACE financing laws, but only a handful of these revised their laws in light of FHFA constraints.

A Feed-in Tariff (FIT) is an agreement in which a utility service provider is required to purchase electricity from a renewable energy seller at a specified price for a specified time period (generally, long-term), according to NREL. According to the European Photovoltaic Industry Association (EPIA), FITs have been proven to be the most efficient solar support mechanisms because of its long-term characteristic. There are many countries that have nationwide feed-in tariffs, such as China and Germany. No state funding is required, as the cost is borne by the utility company, but one issue already grazed upon in this article is the problem related to pricing: if the price is too high, as in Spain in 2007, the market becomes overheated, but if the price is too low, the FIT does not produce enough incentive to drive solar development. Lessons learned from Europe are to establish caps on how much electricity is bought so that the cost burden is borne by the utility company and not transferred to customers and to maintaining FIT program stability over time with a method to allow price adaptation to market conditions.

A certain number of US states already have FIT systems in place. In 2008, the federal government discussed implementing a national FIT. Congressman Jay Inslee introduced a national FIT bill, in which FITs are referred to as Renewable Energy Payments. The bill made an effort to incorporate the major elements that were successful in Europe, especially guaranteed connection to the grid, a mandatory and long-term purchase requirement and payment levels based on the costs of renewable energy generation. The bill did not pass Congress.

A Renewable Portfolio Standard (RPS) requires utilities to supply a minimum amount of electricity generated from renewable energy. Renewable Energy Credits (RECs) are credits by which a utility company complies with the RPS. A consumer gains an REC from a utility company after generating a certain number of kilowatt-hours (generally one credit is equal to 1,000 kWh) for a market-defined price. If the utility company does not comply with the RPS, it must remit alternative compliance standards (ACP), for the amount of RECs it did not generate. ACP is a monetary enforcement set at a higher price than the market cost of meeting the requirement. If the rate is too low, then the utility company will choose to pay the compliance without meeting the requirement, since that is the cheaper option. Thus, the rate of the ACP is incredibly important. Both RPS and FITs are performance-based incentives, and are different from tax incentives because they can be used by non-taxpaying entities.

FITs and RPS are very similar since they both require the utility company to pay a consumer for electricity generated. However, in the case of feed-in tariffs the government sets a price for credits whereas the market sets the credit price in the RPS system. In the US, an RPS and a FIT can coincide; the RPS would set the program capacity target and timeline for renewable energy requirements while the FIT created the market-based incentive to reach the target.

Today, twenty-nine states and D.C. have RPS policies. New Jersey was the first to develop the Solar Renewable Energy Credit (SREC) program, which is based on an amount of the RPS that must be generated from solar energy, providing consumers with SRECs instead of RECs.

In 2009, Senators Waxman and Markey proposed a federal bill, the Waxman-Markey bill, based on a carbon trading system that created a national Renewable Electricity Standard requiring utilities to generate 25% of their electricity from renewable energies by 2025, which matched President Obama's goal. The bill passed the House but not the Senate.

5. Indirect Incentives: A Tax on Carbon Dioxide and Carbon Trading

A carbon tax is a tax levied on carbon dioxide emissions, giving polluters the incentive to reduce carbon dioxide emissions by either becoming more energy efficient or switching to renewable energy. By extension, a carbon tax has the potential of stimulating solar energy use. However, a carbon tax is difficult to create since nobody wants to pay taxes, but it provides the government with revenue that can be re-injected into the renewable energy industry. It also provides the government with control over the price of carbon.

There is no federal carbon tax, but the government does have regulations and standards, called CAFE standards, for fuel-intensive cars. In addition, in 2007, the EPA found that greenhouse gases are air pollutants covered by the Clean Air Act, and in 2009, it found that carbon dioxide emissions from cars contribute to air pollution and endanger the public health and welfare. These findings require the EPA to regulate greenhouse gases, which means a federal carbon tax might exist in the future.

Carbon trading is the complement of a carbon tax. In a carbon trading system, the government sets a limit on the amount of carbon dioxide that is released into the atmosphere, allowing the market to set the price on carbon. Companies are awarded a certain number of credits, equivalent to a certain amount of carbon dioxide emissions; if they pollute more than they have credits for, companies must either buy credits from others that have too many credits based on emissions or invest in low-emission technology, depending on which is cheaper. After a certain period of time, the government reduces the number of credits in circulation, raising their prices and forcing more companies to use renewable energy. Thus, renewable energy use increases over time.

There is no federal carbon trade system, but the Waxman-Markey bill proposed a system in which total emissions would be capped from 2012 until 2050 and carbon would be traded. The bill did not pass Congress. Today, there are two regional cap-and-trade systems in operation, the Regional Greenhouse Gas Initiative (RGGI) and the Western Climate Initiative (WCI).

These five options are available for creating a national renewable energy policy that would effectively push solar energy to become an important player in American energy supply. These incentives have been proven to work, as there are several countries, such as Germany, with successful solar energy markets that were created thanks to positive federal policies incorporating one or more of these economic incentives.