Shedding Light on Solar Lighting: Are they Bright Enough?

Solar lighting products have long been an option for home and garden lighting needs but are sometimes criticized as falling short of expectations. The major problem, say the critics, is that they simply are not bright enough. That was so 20th century thinking. Solar lighting has made tremendous strides not only for the garden but also for playgrounds, roads and security. This learning article attempts to showcase the many reasons to choose solar landscape lighting over traditional lighting in the garden. It will also provide an opportunity for those interested to learn about solar's capabilities and dispel some misconceptions about solar power.

Have you ever had an awesome landscaping or design idea for your home or garden that never came to fruition because you didn't want to hassle with running power out to the project? This is probably the best and most highlighted feature of solar lighting -they can be placed anywhere there is sun and in almost any situation without any wiring or power lines needed.

The beauty of solar power is that the sun's energy is everywhere, and while there are better places than others to place your solar energy products, wherever there is sun, there is power.

So what is the rub. Keep in mind that your solar powered lights will not work if you place them in an area that does not receive enough sunlight.

Besides saving you the trouble of digging up your yard to install hardwiring, solar powered products help to reduce your carbon footprint-the impact that we have on our environment from the emission of CO2 generated by our daily activities. The less carbon dioxide we generate, the better off we'll all be.

One concern is that solar lights may not be bright enough to light your garden, or balcony or patio. As the production of solar energy products is ramping up, quality is also progressing. What was said to be impossible yesterday is being done today and will be laughed at as passé tomorrow. The renewable energy field is no different. Solar technologies are constantly being improved and the quality of most solar products is getting better every day as becoming environmentally responsible has increasingly received greater attention.

The amount of sunlight you receive around your home will greatly affect the performance of any solar products you install. For those who want to get technical, what you need is insolation, which is a measure of the amount of solar radiation energy that lands on a surface in a given time. It is articulated several different ways, but in the case of photovoltaics it is commonly measured as kilowatt hours per year per kilowatt peak rating (kWh/(kWp·y)). The insolation you receive will need to be taken into account when planning your solar home and garden projects.

Bright Days Ahead for Solar Lighting

Solar lights are now generally equipped with LED bulbs. LED stands for light emitting diode, which contains the chemical compound that gives off light when electricity is passed through it. LED bulbs put out a very large amount of light for their size and the energy used. They produce almost no heat and use very little electricity. LED bulbs use about 1/10 the power of an incandescent bulb and are up to 90% more efficient than the same wattage fluorescent and neon bulbs. LED bulbs are solid state rather than relying on a filament so they have a much longer life and are more energy efficient, saving you money.

Lumens Not Wattage are the Key

A common mistake is to compare wattage between LED units and their incandescent and fluorescent counterparts. Wattage is a function of power consumption, not brightness. The appropriate gauge for outdoor lighting comparisons is lumens or candle feet, which measures the brightness of the light. A typical single LED light will give off the equivalent of a 2 watt bulb. As a comparison, an average 100 W incandescent bulb produces about 1,700 lumens, or about 17 lumens per watt, whereas LED lights produce anywhere from 65 - 90 lumens per watt. This equates to LED lights being about five times more efficient in their energy usage.

LED lights have more focused range and a different angle of dispersion, while an incandescent light just glows all around, so your LED lights will create a softer and more subdued lighting effect. This makes them ideal for accent or decorative lighting around your home and patio. 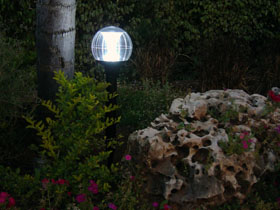 As a final note in this piece, we wanted to explain the difference between lumens and candelas as there is usually a lot of confusion over the two. Light bulbs and LEDs sold for illumination tend to carry ratings in lumens, whereas indicator LEDs tend to be rated in candelas. The difference is that lumens measure light output at the source, while candelas measure the light that falls on a surface. So, as the area of the light-receiving surface increases, the number of candelas will decrease even as the number of lumens remains constant.

You can use this table to get an approximate conversion from candelas to lumens. Find your LED beam width in degrees, and divide the candelas number listed on your specs by the cd/lm factor listed for that beam angle to get lumens.

While planning your next home improvement project, we encourage you to do your homework beforehand and choose solar. As the prices on solar products have gone down, the quality has gone up. With our environment being taxed more and more each day, now is the time to start supporting a brighter, cleaner future for us all. SolarTown carries all major varieties of solar lights and, if you have the sunlight, we have the solar powered lighting application for you.